Many companies have trade secrets that are extremely valuable to their business. Trade secrets typically are viewed as a company’s “top secret” information and could be its most valuable asset. A well-known example of this is Coca-Cola, which relies on their secret recipe every day to create their popular and well-loved soda. This secret recipe has been a key component to their success. Federal and state laws provide various protections for trade secrets. 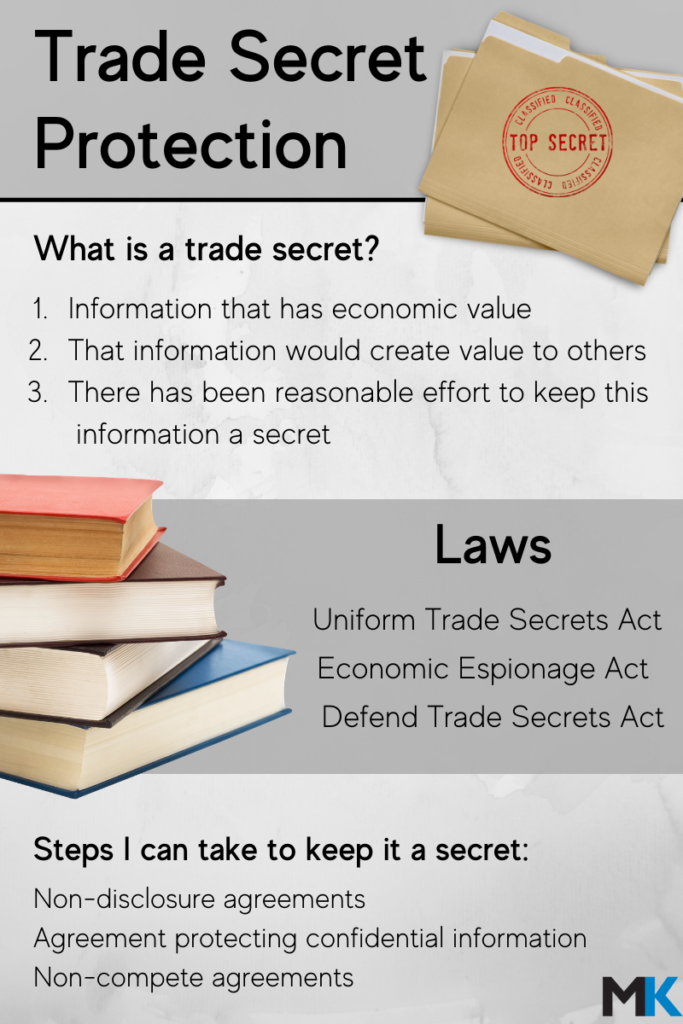 What is a trade secret?

Trade secrets differ from patents, as patents have a time limit attached to them. Patents also are filed, and many details have to be clearly laid out, which is then available for the public to see. Once that time limit is up, there is no protections from someone using your idea. Although patents are a great legal resource, classifying something as a trade secret can continually protect your confidential and important business information.

There have been steps taken by the government at the federal and state levels to protect trade secrets. Three notable laws include the Uniform Trade Secrets Act, Economic Espionage Act, and the Defend Trade Secrets Act. These three laws allow legal resources for companies to continue to protect what makes them so profitable.  Below are brief overviews of each law.

The Economic Espionage Act of 1996 established that the theft of a trade secret is a federal crime. This law is especially harsh on those that try to steal a trade secret when that secret would benefit a foreign entity.

Lastly, the Defend Trade Secrets Act of 2016 (DTSA) amended the Economic Espionage Act. It allowed private parties to bring civil action in federal courts if the trade secret relates to a product or service used in interstate or international commerce. This act also allowed for the seizure of property to prevent dissemination of your trade secret. The DTSA also protects whistleblowers with established whistleblower immunity.

This act does not replace the UTSA. If you are bringing forth a claim of misappropriation of your trade secret, you can choose whichever venue to file your claim.

What steps can I take to protect my trade secrets?

First, the company should implement strict measures to protect the trade secrets, This may mean keeping the secrets under lock and key, password protecting secret files, and similar protective measures.

Second, the company should protect their secrets by written agreement. This may take the form of an employment contract with key employees who have access to the secret. It also may take the form of a non-disclosure agreement (NDA), agreement protecting confidential information, or non-compete agreement. These three agreements often are combined into an employment agreement for a key employee and certainly help keep trade secrets safe. These protective measures must be reasonable and taken within a reasonable time.

How McDonald & Kloth, LLC can help you with your trade secret protections