|  | Mediation of construction disputes in Wisconsin and Illinois

Mediation of construction disputes in Wisconsin and Illinois

Construction projects often involve many different parties. Between suppliers, vendors, contractors and subcontractors, many different disputes can arise. When there is a dispute, early resolution often is in the best interest of all parties. There are many ways that a resolution can be reached. One type of early resolution method is mediation. If you prefer mediation as the means to resolve disputes, you should consider adding a mediation provision to your construction contract.

Often, dispute resolution takes place in four different forms. These include direct dealings between the parties, mediation, arbitration, and court litigation. While court litigation is often what you hear about, the alternatives to court litigation often times are much quicker and less costly.

In mediation, the parties who have an unresolved dispute look to a neutral third-party, called a mediator, to assist them in finding common ground to resolve the dispute. The mediator works with both parties in an effort to come to a compromise. The mediation often is done in one or more conference rooms at an agreed upon location. This may include the mediator’s office or one of the attorney’s office. While the mediator typically begins the mediation with all parties in the same room, the parties will break into their own caucus rooms at some point. The mediator then bounces between rooms to share information and offers.

If a compromise is reached, the parties will confirm the agreement in a written document. It has often been said that the true indicator of a good settlement is where both parties leave unhappy. The logic behind this statement is that it takes a great deal of compromise for both parties to find a resolution. Both parties usually give up more than they originally had intended at the beginning of the mediation.

Arbitration also involves parties using a neutral third-party, but this person is called an arbitrator. The arbitrator meets with both parties and hears both sides of the dispute. The arbitrator then makes a final decision as to what the resolution will be. This decision is legally binding and both parties must comply with the outcome. While it is very similar to court litigation (i.e. arbitrations involve the presentation of witnesses and evidence), it’s usually much quicker and less costly than court litigation.

Lastly, court litigation involves a lawsuit being brought by one party against one or more other parties in a civil court of law. This can be very time consuming and costly. There would be a much longer duration between the start of the dispute and the resolution when compared to mediation or arbitration. Like arbitration the judgement made on the case would be legally binding, which both parties must comply with. Depending on the docket of the court and the complexity of the case, court litigation can take anywhere from several months to several years. 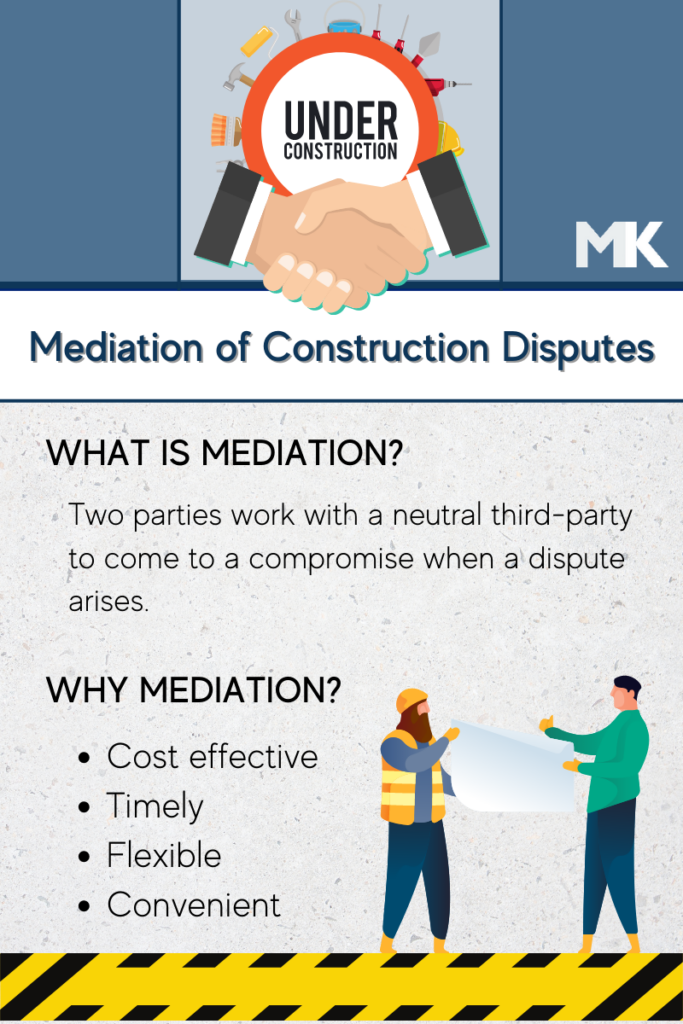 Why do people choose mediation?

Mediation is both cost effective and time efficient. Arbitration and litigation may take weeks to months to schedule. The final resolution made is often made a months or years from the original dispute arising. Disputes during a project may need to be resolved as soon as possible, which mediation allows for. Mediation is done at the nearest convenience of all parties. Since mediation is often done faster and has less cost associated with it, the parties can often maintain a relationship for the duration of the current project and future projects.

Mediation of construction disputes is a common place to start dispute resolution. It allows for flexibility and convenience. Although it may not be legally binding, it allows both parties to compromise and maintain a relationship. This relationship may be needed in future projects or to finish the current project that this dispute has arisen from. If you prefer mediation as your first step to finding a resolution when a dispute arises, you should include that in the construction contract. By including this in the contract, both parties would have to comply with trying to fix a dispute through mediation rather than arbitration or litigation.

Our construction lawyers can help you

McDonald & Kloth, LLC understands how important time and money is when doing business with other people. We also understand how important preservation of relationships in business can be. If you are looking to mediate a construction dispute, call 262-252-9122 and speak with one of our experienced construction attorneys.